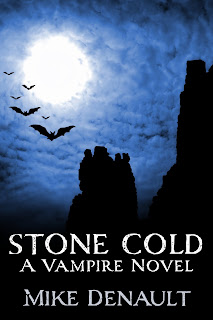 “Damien Magneson's life is anything but normal. He is part of an innocent vampire family, helping to promote peace, all while secretly working alongside the local government to track and eliminate supernatural threats that may harm society. However, when Damien meets target Aderra Fayre, who is part of a potentially sought-out and labeled family of serial killers, he feels he must protect her. Damien's life changes dramatically, now living in a world filled with constant drama, violence and sacrifice.” GoodReads’ blurb

A vampire novel? Of course I had to read and review it!

I’m still trying to figure out Stone Cold, really. I know it didn’t grip me, and I know why, but I can’t shake the feeling that the book doesn’t know which age range it’s aiming for. It might have turned out better if it had been more clearly geared towards middle grade, which is the only place I’d be comfortable with the storyline, and in that case the things that nagged at me might not be so bad.


Then again, there’s some stuff that I need to point out either way. Here I go:

The thing that held me back from completely immersing myself in Stone Cold was, first, Damian himself. I love a male lead, but I ask the same thing I ask of any lead: that he acts. That there’s some king of logic to his reactions. That his feelings are consistent and not stemming from a sheer desire of being contrary. From the first scene, he has an indecisive streak that, in my mind, didn’t let go of him through the whole story.

As always, let me illustrate with an example from the first chapter to avoid spoilers: Damian and his sister and pursuing a mark. They’re waiting for him outside the building. When the man comes out, Damian starts reading the files on him and then goes to confront him. He calls out, makes himself visible, tries to buy time. I assume that it’s because he has a plan to enact with his sister, but no: after much doubting –and after giving himself away- he knows he needs to fight. And he freezes. Why? I don’t know. His sister intervenes, taking Damian by surprise, and gets hurt. Damian is still thinking a lot, doing nothing. Then, after the villain gives a little speech, Damian jumps in and kills the bad guy.

That’s why I couldn’t connect with his personality. It wasn’t only indecisive: it felt a bit too cardboard-like, as if he were guiding us through a set of events that must happen just because.

Still, that’d have been okay. Not good, but okay. What killed me – and what I think will kill you too – is the fact that the story is told in first person point of view, by Damian... and he proceeds to relate events where he’s not present and of which he shouldn’t be aware. Another earlier chapters example:

A journalist trying to get a scoop on the vampires comes to the hospital where the sister ended up. Damian is arguing with his parents, then he runs into the woman while on his way to the toilet, and finally leaves. And then he tells us how this very tricky journalist went to ask questions to the reception desk, how she waited until the nurses were gone, and how she grabs something since the info isn’t under locks. The fact that this scene wraps up with a “little did I know” clause only made me cringe harder. And this switching between Damian’s point of view and the happenings with the journalist just kept coming, all of them equally, seamlessly flowing together.

I could talk about some other stuff, like the cast or the way, somehow, the vampire boys (who should be quite old, even if I still haven’t figured out how much) decide to get into an even greater mess that might destroy their whole family in order to fix a mess that shouldn't have happened anyway. But I think you can already get the idea.

So... Not recommended. Not until it undergoes some serious editing. If you like vampire books, there’re a hundred titles I’d direct you to first.