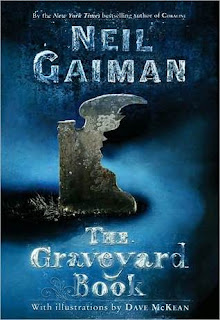 “Nobody Owens, known to his friends as Bod, is a normal boy. He would be completely normal if he didn't live in a sprawling graveyard, being raised and educated by ghosts, with a solitary guardian who belongs to neither the world of the living nor of the dead. There are dangers and adventures in the graveyard for a boy. But if Bod leaves the graveyard, then he will come under attack from the man Jack—who has already killed Bod's family . . . Beloved master storyteller Neil Gaiman returns with a luminous new novel for the audience that embraced his New York Times bestselling modern classic Coraline. Magical, terrifying, and filled with breathtaking adventures, The Graveyard Book is sure to enthrall readers of all ages.” GoodReads’ blurb


The Graveyard Book sure is different from anything I’ve read lately. I think the magic was on the way the storytelling had that traditional feeling that makes you think of bedtime stories, of tales spun by the fireplace, and on the way the voice changed through the book.

The first reason might be a side product of this being an audiobook, in my case. It was narrated by the author himself and he spun it in a captivating way. I’m more used to first person POV in audio for it to work, but this time the narration was smooth and hooking.


While Mr Gailman’s style didn’t change as he read, there were subtle changes of feeling in the text, and in the end it felt like a completely different story. Except that it was clear it wasn’t, because it had varied just a little bit from the previous chapter... What I’m trying to say is that the book grew as its protagonist did.

I know that sounds weird, but we first meet Nobody Owens as a toddler and, with each passing chapter, he grows until the conflict is resolved by the time he’s around fifteen. Each chapter visits a particular event in his life, something to illustrate how he was and how he grows up, so we actually end up visiting Nobody (or Bod, as they call him) eight times in his life. Each time we can see how he evolves, and that’s what I meant about the magic:

He changes because of what happens, yes, but he also grows. Just time passing. And the way Neil Gaiman manages to convey this, to make him sound like he has the proper age in every chapter, is nothing short of wonderful.

Bod is not the most normal boy ever, but within his peculiarities he offers a prime example of a boy his age, if you know what I mean. For example, fussing about studies instead of playing, hating uninteresting lessons even when they’re useful until he finds them actually useful, doing what he’s told not to do, pushing the parental boundaries when he hits puberty...

Granted, the studies he hates relate to haunting and fading and scaring people; he rebels by being out of the cemetery, and his way of playing involves crawling into unmarked tombs.

And it still is complete relatable.

I’d have loved to be friends with Bod. His courage, honesty, and yes, intelligence, make him such an endearing character. The way he faces bullies at one point got me on his team, for example. He’s a good guy, but he won’t hesitate if he has to be a little shady when the situation calls for it.

Back when I got this book and featured it in my IMM, you all told me that it was such a great read. And yes, I understand why. I’d certainly recommend it, too.

There were only a couple of things I didn’t really like. One was the ending which left me feeling a bit sad... Unnecessarily so, too. The other might be due to my thick skull, but I don’t really get who the bad guys are, or what Bod guardian and friends do to them.

Still, it’s a great read, different from your average paranormal fantasy, and I’d tell you to read it right away.