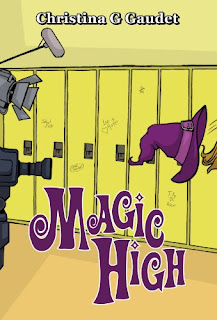 “Welcome to Andrew High, a school for mages...

That is, until its doors are opened to the non-magical, or “normie,” population. That means no more magic allowed on school property. For Tabetha Long, whose powers are directly related to emotions, hiding her magic is difficult. When her mother is hired as the new gym teacher, and her father comes back to town with is reality television show, difficult becomes impossible.

Now her every move is being caught on video and everyone else at school wants in too. All Tabetha wants is to become invisible.

But then the mysterious and cute new guy, Eric wouldn’t be able to see her either...” GoodReads’ blurb

What a delight! Reading this book was so funny that I went through it in just an evening (okay, and a bit of the following wee hours of the morning).

First off, I’d like to point out, before I forget, that I believe Magic High to be aimed more to the younger Young Adult readers, say twelve to fifteen years of age. Not that older readers won’t like it –hey, I did!- but the storyline fits better, I think.


So, what’s that storyline? Not spoiling it! Suffice it to say that, more than the eternal fall head over heels in love with –insert name of hunk here-, this is more about the life and less about the love life. That is not to say that there’s not sweetness around, but there’s also friendship issues, family issues, and in general all of those things that seem to be so important when we’re teenagers against the world of non-understanding adults.

That’s a feeling that Magic High nails right in the head, and Christina Gaudet does so in the words of Tabetha, who is a girl growing up –and discovering love- and trying to forgive her father – while learning to cope with fame- and accept her mother –who is a normie- without loosing her sense of humor. From pure sarcasm to plain old desperation, Tabetha’s voice was genuine and kept a smile on my face at all times.

I liked the way the plot came around, too. There’re several open fronts, and at first I thought that the end would be rushed or anticlimactic, but the truth is that in the end all the threads weave together in a satisfying way.

I have to admit, at first magic seemed too simplistic for me. But then there’s this nice way to wrap around the simple way it works with the plot of the book that was kind of neat. And while some things are extreme, they’re also hilariously funny – or deeply emotional – so I’m definitely not going to complain. In any case, this is the reason I said younger readers would enjoy Magic High better, and after all I don’t recall worrying too much about plot intricacies and magic systems when I was thirteen.

So, in short? If you like light reads, coming-of-age stories, and sweet, clueless romance... Grab this one. If you have a daughter/niece/friend who likes to read, or who needs to get into the habit, try this one as bait.