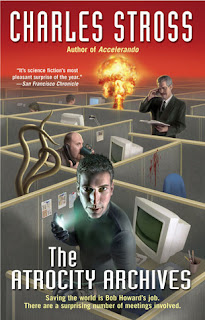 “Bob Howard is a computer-hacker desk jockey, who has more than enough trouble keeping up with the endless paperwork he has to do on a daily basis. He should never be called on to do anything remotely heroic. But for some reason, he is.” GoodReads’ blurb

Even if you don’t have a particularly strong feeling about any of the above, I daresay you’ll love the Atrocity Archives anyway.

I have the audiobook for this one, read by the amazing voice actor Gideon Emery – you might have heard him, as Balthier in Final Fantasy X and as Fenris in Dragon Age 2. It was his voice that made me take the leap, and boy, am I grateful! Stross is, to put it in a few words as possible, pure genius.

Let’s try to put it into perspective. Imagine a your average IT support guy, with his geeky looks and attitude. And now imagine that magic exists. That it’s a form of maths so complex that you need computers to pull it off. Go it? Cool. In this reality, your IT support technician is actually a certified demonologist who works for Her Majesty’s Government, keeping at bay anything that might go bump in the night.

Of course, life’s not glamour and risk. That’s what the movies are for. Life’s all about... Memos. Forms. Audits. Turf wars between different managers who want to get the best budget for the next semester. And since our agent is still in all the important ways a computer savvy, he still gets called on to update the company software or to fix up the printer that stopped working.

And, in between one call and the next, he has to save the world from the baddies. Without incurring in extra expenses, if he doesn’t want to face the wrath of his superiors... Which might be worse than the nameless evil to begin with.

If that’s not some serious hilarious potential, then I don’t know what is.

And the Atrocity Archives lives well up to its potential.

I won’t go into detail about the actual plotline and evil foes to avoid spoilers, but Stross has woven a very complex tale here, with plenty of mystery that will keep us guessing – mostly because Bob, our resident geek, doesn’t know what’s going on half the time. Even though the books are nothing alike, the way he keeps fumbling in the dark and going up against impossible odds, often without even realizing it before it’s too late, reminds me a little of Harry Dresden so... if you like the Dresden Files, you’ll love this one.

Magic as complex maths is actually a very good idea. It’s the Lovecraft inspired part of the story, but you don’t need to have read Lovecraft to enjoy it – it’s very well explained here. There will be bits where you’ll probably get lost, but that’s part of the charm of the book, I think: imagine Bob in his mission, risking his life to do the right thing, dealing with powerful extra-planar manifestations... Is he going over his plan of action? No, he’s going over all the paperwork he’s going to have to fill, and the protocols he’s ignoring, and the audits that will be waiting for him back at home...

It gives a proximity to the surreal situation that makes it all so much effective – and so very, very funny!

The comedy factor doesn’t detract from the action itself. As James Bond’s novels, the conflict in the Atrocity Archives is bigger than a single evil guy, bigger than a single country threatened. It has been dragging on for a long time, and when it finally explodes, Stross will keep you on your toes, wondering just how they’re going to fix the situation. If they can even do that.

The Atrocity Archives comes with another novella which is also extremely interesting. While the potential for disaster is there, this time Bob works in his home turf and we get to explore horrors beyond the demonic entities we faced in The Atrocity Archives proper. It’s such a delightful insight into the way The Laundry – the secret service of Britain against the occult – works, that I couldn’t stop laughing once I closed my mouth from the shock of it all. And to top it off, the novella offers a very interesting explanation to the laws that created digital cannon and instated DRM into our hardware.

Really, I think you want to read this. You won’t regret it.