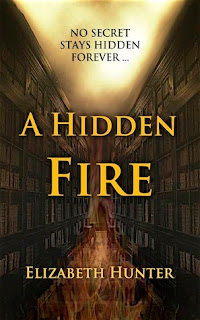 A phone call from an old friend sets Dr. Giovanni Vecchio back on the path of a mystery he'd abandoned years before. He never expected a young librarian could hold the key to the search, nor could he have expected the danger she would attract. Now he and Beatrice De Novo will follow a twisted maze that leads from the archives of a university library, through the fires of Renaissance Florence, and toward a confrontation they never could have predicted.

A Hidden Fire is a paranormal mystery/romance for adult readers. It is the first book in the Elemental Mysteries Series.

"A tantalyzing paranormal romance, full of mystery and intrigue. One of the best books I've read in a long time. Sign me up for book 2!" Nichole Chase, author of Mortal Obligation, Book One of The Dark Betrayal Trilogy” GoodReads’ blurb


Have you ever been worried that your review couldn’t make justice to a book? Well, that’s the case here.

You know how there’s been so much written about vampires that some readers just say they’re over with the genre, or how some writers just tell the same old story with different degrees of success.

If that’s what you think and you’re loosing faith, hold on to you beloved vampires because Elemental Mysteries is not any other vampire book.

The worldbuilding Elizabeth Hunter did on her universe is fascinating. We’ve perhaps read about vampires having strange powers, personalized powers... but we haven’t seen whole vampire clans defined by the power they wield. We’ve not seen how the exception to that norm can throw the whole vampire society in a riot. I hate spoiling things, but come on, look at the title of the series. And what happens with vampires and fire? Exactly. So, whoever gets to control fire is a major badass, right?

Actually, not quite. Giovanni, or Gio as we call him, has more interest in researching books and finding lost treasures than in terrorizing the neighbourhood.

While checking out one of those ancient texts, he meets our girl – B, Beatrice. A librarian with a lot of snark and Doc Martens booted feet. She’s intelligent, beautiful... everything he’d want.

Or he doesn’t think he does, at least. He makes a really good job of self-denial until... Wait, that’s me walking into spoiler land.

B doesn’t fall head over heels in love with our dear Gio, either. Sure, there’s the attraction – how can it not be? But when she discovers what he is, she actually puts distance between them, tries to think things through, denies that there’s anything except camaraderie between them.

But she’s still shocked and betrayed when... something happens, something from Gio’s past. This something makes Gio realize just how much he cares – rather, it makes him accept what he already knew.

Telling you why A Hidden Fire is so wonderful without actually telling you what happens is starting to kill me. There’s too many “somethings” involved. But bear with me, please, because -

This would be the second best thing in this novel: instead of the events running as any other author has condindioned us to expect – cool guy sweeps in, saves the day and gets the girl kind of thing – we have real reactions.

B has gone through something (see? back with the somethings) and it has changed her outlook in life, and her perception of Gio. She needs time to bounce back on her feet, just like a real girl in her situation would need. The natural way the author has handled this part is more than enough to set the series apart.

Trust me, you won’t see the end coming.

But okay, if realistic characters, deep relationships that have more that instant flaming desire to them, and thrilling plots interwoven with books long lost to man are not enough, then let me give you the secondary cast.

This book is not about Gio and B with some other characters thrown in to generate background noise. It’s not about getting another male to force a love triangle, or another female to spark the jealousy crisis. It’s about real friends, and also about having family – how refreshing is that? When was the last time you read a paranormal in which the main character had a grandmother and acted accordingly? What was the last title where the hero’s hot friend is just a friend - and yes, free for you dear readers to fantasise about?

So there: that’s my statement. If you get all of the above and bind it in a book with past-paced prose, well chosen words and just the right mix between action, romance and mystery... How could it go wrong?

Short answer: it can’t. Trust me and read this, you won’t regret it.