Review: Tales from Under the Bridge, by P.D. Blake 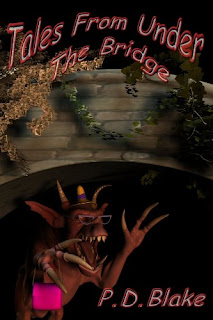 “Tales From Under the Bridge, all you ever wanted to know about trolls, and a few things you probably didn't. Life and death, myth and legend, magic and mayhem, all rolled up into six fabulous stories that lift the lid off the dark world of these wonderful, horrible creatures. With a supporting cast of drunken gnomes and angry fairies, Tales From Under the Bridge drags trolls out of the darkness, kicking, fighting, biting, drinking, belching and farting, into the light of day. Just don't expect them to be happy about it.

Join these marvellous monsters as they practice their own, well, different, flavour of magic in a school for troll wizards. Observe them prepare for parenthood, question their morals and fight for their bridges. Experience their seasonal festivals and intrude upon their mating habits. Prepare to witness secrets never before revealed.' GoodReads’ blurb


A lot of things to say about this book... And all of them are good, actually!


First off, this is a collection of short stories – thought I should put it out in the open.


Second, and this is the difficult part to explain, try to picture Shrek without the seems-to-be-childlike-but-it’s-not humor throw in a huge dose of real character depth, and try to come up with something that is both touching and funny at the same time. Got it? That’s Tales from Under the Bridge.
The stories all are amusing – or at least, they kept a smile firmly pinned to my lips. There were tales of trolls learning magic, falling in love, having grudges with each other, reacting to other, well-known species, and even evolving. Somehow, each time I got to feel for the characters and I even glimpsed a bigger, more human problem behind their adventures – like the price of doing the right thing or the classical misunderstood lovers... Okay, the story about the New Troll was mostly humorous (you’ll get what I mean if you read it... saying anything else would spoil the fun) but still. If you like fantasy, the good old fashioned folk legends, and can empathize with the other side from time to time, and learn to care for the non-human characters even if they’re not pretty, I’d recommend this book for you. I’d probably shove it into your hands. But, see, that’s the key point on whether you’ll like it or not: “even if they’re not pretty”.

There’s no real profanity-problem in here, but there might be a hygienic problem. A few examples include the physical descriptions of the troll equivalent of Angelina Jolie, with moustaches and warts – and that’s just the most visible issues! Another example? Troll magic. It’s cast by burping or passing gas, among other ways. So I guess you might not find it so cute if this stuff feels too gross for you... But I didn’t have a problem with it, beyond the occasional smile, because they are trolls and trolls are supposed to be monsters, right? I’m not supposed to picture myself riding off into the sunset with one of them, so I truly enjoyed reading about their lives and their struggles, and about how they tried to ride off into the full moon into a version of a happy ending.

Also, I realize that the cover might not be too attractive – might not look too serious! But in my humble opinion, this titles was beautifully written and well edited, and even if I hadn’t liked the stories and the characters as much as I did  I’d not have been able to find a single fault with the text – I loved the style! Only problem you might have, perhaps, moreover if you’re not a native, is that trolls, as it’s well known, do not speak with an Oxford accent. Which doesn’t mean that you can’t understand them... It just adds to the flavor, I think, but better to warn before hand than to have a displeased reader later on!

So, to sum it up? A read I thoroughly enjoyed and would recommend for anyone with an interest in the fantasy genre.