Review: The Secret Power Beneath, by Frank Acland 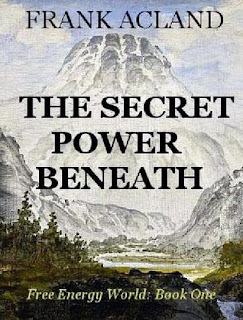 “Hans Swensen holds a position of great responsibility in a hidden nation built in a subterranean cave system beneath the mountain wilderness of Norway . His people are able to exist in secret because of the discovery of an inexhaustible form of energy that has led to the development of a society more technologically advanced than anywhere on earth. While physically utopian, there is an oppressive side to this society, with a totalitarian form of government in place which is fearful of dissent, disorder and abvove all, discovery by the outside world.

Hans knows something that imperils his people, and he must fight against all odds -- including his cousin, Fredrick, the President of the Nation of Bergsland -- to save his people from destruction.

When two young vacationers stumble upon this strange world accidentally, they are taken captive and find themselves caught up in events that test them to the very core -- and become involved in a drama that will determine their own future, the future of this nation and the secret power that drives it.“ GoodReads’ blurb

This tale could have been so good!

The themes are raving actuality, for example: environmental sustainability and alternate power sources are things we heard about everyday, and kids growing up everywhere need to be aware of the issues.

There is a semi-dystopian feel, what with the underground society, controlled with iron reins with less scruples than advisable, or rather than desirable, in any country leader.

There’s a weak resistance that slowly grows tired of the oppression, of the fact that just not agreeing is more than enough to end their lives, socially and professionally if not literally.

There’s a couple of siblings, emphasis on the clear hero, who stumbles upon this dystopy and turns out to be the catalyst for change.

On top of that, the hero is a techno-lover, just as most teenagers are today. He can’t survive away from computers, internet, music... He doesn’t really care for family-time. But, as the story progresses, he learns to appreciate his family, nature, outdoors time, and he does save the day at the end! How’s that for evolution?

The writing was very easy to follow, too. There were scenes, mostly at the beginning, not entirely necessary that slowed the text down a bit, like the introduction of an uncle who had no apparent role other than taking the family to the airport.  But it wasn’t actually bothersome, and it could have been quite educative and entertaining (even if I think it’s more geared towards the younger spectrum of the YA public).

So, why do I keep talking in potentials? What did I dislike?

Even the monster legacy houses can, and do, get typos into the final versions. Everyone can misspell a word, write something that doesn’t make sense because our finger hovered over the wrong keys at any given instance. That’s okay.

That wasn’t the issue here.

The lack of editing, this time, was evidenced by grammar. Of course, everyone can get a comma wrong (I’m the first one!) but when the finished product starts to read suspiciously like a manuscript... I start having issues.

Punctuation is as important as word choice, as typos. I’ll even say that it’s as important as the story line, because it works out the flow. If we add a case of random change of tense with running sentences, then I’ll not only be pulled out of the story, but bothered because I’ll feel like the book was published right after it as written, no revisions or editing in the middle. I’m not saying it was the case, but it was certainly how it felt. If I make fifteen notes about several cases in one chapter, it’s bad.

The potential is there, okay, but as it is, I can’t honestly advise you to rush out and get your own copy.