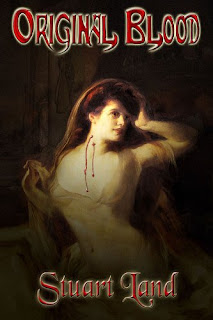 “-ORIGINAL BLOOD is the delicious, but tormenting tale of Zondra and Gailene as they’re turned into vampires against their will. Separated by two centuries but bound by familial blood that threatens to destroy the vampire nation, Zondra experiences a mind-bending skewed Cinderella story with hot motorcycles, limitless money, and ancient mansions teeming with the undead, while Gailene must rise from devastation, rage, and vengeance to become a powerful vampire leader in the New World. Both women are forced to overcome their circumstances, one of privilege, one of destitution, to gain the power that will save themselves and the man they both love from the retribution of their creator-“ GoodReads’ blurb

Original Blood has been a extremely difficult book to evaluate for me. Overall, I did enjoy it, and the quality of the writing is more than average, but there were a couple of things I did not care much for. Let’s take it step by step:

The storyline here follows two women from the same family: the one was turned into a vampire in the England contemporaneous to the French Revolution, and the other lives in current day States. Little by little, the lives of these two women begin mixing up, and both of them change as the new events are incorporated to their characters, and everything coalesces into a final confrontation against a man, a vampire. This was the part that I enjoyed the most. Not only did the characters, Zondra and Gailene, change and evolve little by little, but their discoveries about what is happening lead the reader into understanding the events. The voices are different, yes, but it’s more than just two people being different: when we switch from present to past, the whole style of narration changes, and it truly feels as if we had gone from a modern supernatural novel into a classic novel with gothic horror tinges.

This book gripped me from the beginning, leaving me eager to find out what was going on, but I’ve to admit that as the story progressed, it became more and more obvious that the answers I sought would be a long time coming, and that Original Blood was more a story meant to be enjoyed, sitting back and travelling from past to future, watching the world change and peeking into the roles Gailene and her vampires have played into well-known events – and how that’s going to affect Zondra today. Therefore, if you pick this one up hoping for a quick, thrilling read, you might be disappointed. Otherwise, the prose is really smooth and enjoyable.

I said there were two things I didn’t really care for, though. That’d be an excess of eroticism and the final confrontation itself.

Now, I’m not exactly a shy reader, no matter how much YA I review in this blog. I enjoy the eye candy as much as anyone, but I found that in this case, the relationships with the two vampire woman don’t serve to advance the character of Gailene, but do weaken her romance with Jeremiah. And taking into account that Jeremiah’s the link in the chain between past and future, the reason Zondra’s how she is, and in some way the catalyst of the final confrontation, I think his importance would have been underlined if he’d been more unique. I’m not saying that Gailene shouldn’t have had another person in her life, but I’d have wanted this (or these) other person to help the character growth rather than just be. As it was, instead of making Zondra and Jeremiah precious, I felt they were just another couple and that was such a pity. When the main character gets almost as much pleasure from riding a bike with her best girl friend, from drinking an Amaretto, or from sleeping with the lover of her life...

The other grip I have with this one is the climax, as it were. We’ve spent the whole novel building up to a revelation – waiting for Zondra to remember the Jeremiah from her ancestor’s life. We’ve been conscious of lurking danger, and finally we know what that danger is. And I even get why it was solved the way it was, why it’d take such actions to finally end the hostilities, but... It came a bit too abruptly for me. It was over a bit too soon. I can’t go into more detail without spoiling the book for you, but I was left wondering, okay, now what?

That’s why it was so difficult to rate Original Blood. As far as quality is concerned, you won’t be disappointed. The novel is very good indeed, better than a lot of legacy published titles. I have to note that. I also have to note that I can’t recommend this book to any and all, because some readers might be uncomfortable. What I can do, though, is guarantee that if what I’ve called “the weakest points” in the novel don’t bother you, then you should definitely read it, because it’s worth it. So, there you go: my four stars with a warning.