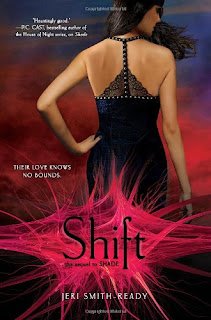 “Aura’s life is anything but easy. Her boyfriend, Logan, died, and his slides between ghost and shade have left her reeling. Aura knows he needs her now more than ever. She loves Logan, but she can’t deny her connection with the totally supportive, totally gorgeous Zachary. And she’s not sure that she wants to.
Logan and Zachary will fight to be the one by her side, but Aura needs them both to uncover the mystery of her past—the mystery of the Shift.
As Aura’s search uncovers new truths, she must decide whom to trust with her secrets…and her heart.” GoodReads’ blurb

After my raving review of Shade, I’m sure you already expect me to go off the rocket with Shift. Well, you’d be right.


For me, the best point of the whole series was and still is the characterization: their voices, their growth, their choices and doubts... In Shift, we get more of that awesomeness. Aura has made her choice between her dead love and her alive love, which felt like a huge step in the right direction, but this doesn’t make it easier on her and her chosen one. Far from it: new complications arise, and they are more complicated than life and death in a sense. Because, really, what can you do when you think that maybe, possibly, being with the guy you love could have some nasty backlash on the world at large?

That’s what Shift is about. Zach and Aura try to find their answers, and to understand the Shift that changed the world and brought ghosts into the public eye. They try to connect the dots and uncover Aura’s past, Zach’s father’s past, professor Eowyn’s past, and a magic moment suspended in time during the solstice in a druidic circle. It’s this moment, this even, that will stand between the couple as they try to figure out why they are the first and the last, and whether it’s dangerous for them to be together – dangerous in a whole rip-the-world-apart way.

Even though it’s still about their personal relationships and their feelings, Shift has more tension than Shade. The folks from the government agent are getting closer to catching the pair, and Zach’s dad can’t keep them as bay as well as he used to. Won’t say much more on the matter, but I want to... Oh, believe me, I want to so badly!
The end for Shift is satisfying in many ways. It’s closure for Logan, a promise of future for Zach, peace of mind and heart for Aura... but still, there are a ton of questions. When Shift’s over, we feel all happy and complete, all smart about having figured out stuff – except, we haven’t. We know a little more than we did, but we still know nothing of importance. Aura has figured out her past, yes, but how came that past to be? How was it possible? how will impact in her future? Government agencies never back off, so, how will she be affected by this knowledge?

The third and final book for the series, Shine, should be coming up Spring 2012, and I can’t wait for it. If I were you, I’d be sure to read up Shift before the release date, so you can sink your claws on the answers – and okay, on a certain hunky Scot – the very moment they come out. I know you won’t regret it!