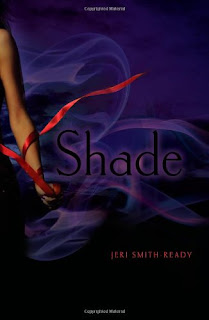 “Love ties them together. Death can't tear them apart.
Best. Birthday. Ever. At least, it was supposed to be. With Logan's band playing a critical gig and Aura's plans for an intimate after-party, Aura knows it will be the most memorable night of her boyfriend's life. She never thought it would be his last.
Logan's sudden death leaves Aura devastated. He's gone.
Well, sort of.
Like everyone born after the Shift, Aura can see and hear ghosts. This mysterious ability has always been annoying, and Aura had wanted nothing more than to figure out why the Shift happened so she can undo it. But not with Logan's violet-hued spirit still hanging around. Because dead Logan is almost as real as ever. Almost.
It doesn't help that Aura's new friend Zachary is so understanding—and so very alive. His support means more to Aura than she cares to admit.
As Aura's relationships with the dead and the living grow ever complicated, so do her feelings for Logan and Zachary. Each holds a piece of Aura's heart...and clues to the secret of the Shift.” GoodReads’ blurb

I should start noting whose review makes me read what, because I don’t think I’d have picked up Shade otherwise... And it was such an amazing read!

First off, I should probably correct myself: it was a fantastic listen, I guess, because once more I went for the audiobook. And now that that’s out in the open, let’s move on to why I loved this book so much, shall we?


The one thing that held me back from purchasing this book until I decided to trust that lucky review a while back was the very concept of the shift. One girl being able to see ghosts sounded really cool, and mysterious, and all kinds of possibilities arose there. I thought that making it a generational event, a great rift divide where everyone born after a certain point in time could see the ghosts in question... I thought it’d make the experience more commonplace, that it’d take part of the magic out of it.

Of course, I was wrong.

The ghost issue is handled with such mastery that, while it’s accepted and happening all around, it’s still new. No one knows the why, or the how, but suddenly the dead are not departed and everyone has to adapt to their presence: finding ways of helping them, of escaping them, perhaps even of destroying them. The fact that the ones pulling the strings are all too old to actually see what they are studying, and that information is far from concise and far form accurate – as a matter of fact, it’s just far from available! – just gives the Shade world an intensity I had not expected. I was captivated, and I couldn’t stop listening. I even broke one of my number one rules – write the review of the title before you get to the sequel and mix them both up. But that’ll be our secret, right? The story was just too gripping to put it down!

Aura, the main character here, is the perfect example of the kind of heroine I like: she’s not as strong so as to be annoying, but she’s far from weak. She has family and friends to support her, and when her whole life shatters, and in spite of the rumor mill, she still walks with her head high and fights for what she believes. She won’t let anyone tell her what to do, or who to love.

And, on the who to love topic, that’s another thing I ended up being sorely mistaken about. I’d have thought myself a Logan fan, more so when he’s a musician and so cool, and my feelings when the third wheel, Zach, showed up were pretty much “Intruder!” alarms going off everywhere. But Zach had his own brand of charisma, enough to bring him out of the pages (or of the speakers, I guess) and he clicked with Aura in ways that Logan couldn’t have. Logan was love, and I loved that, but Zach was also growth, maturity. The one supported Aura, the other complemented her. And while I still think the teenager love, reckless and unsure and unconditional, is cute and utterly swoon-worthy, I must confess that I was swept off my feet my Zach’s steady romance. Besides, much like rocks themselves, when the spark shot out between Zach and Aura... earthquake proportions, earthquake aftermaths.

So, again I was wrong: I am team Zach.

This fact, of course, only made me more “Whaaaat?” when Shade ended. My whole world was thrown upside down after the last scenes – as Aura’s was, I’m sure. When what seemed like a non-consequential incident back in the middle of the book suddenly becomes glaringly obvious, vitally important, and Aura’s only hope. Mine, too, because if she doesn’t pull this one off, I can kiss goodbye to my happy ending.

Now that you’ve all the facts, I hope you understand and forgive that I devoured both Shade and the second book, Shift, in a scant three nights. The only reason I didn’t go  for book three, Shine, is because it’s coming out in 2012...

If you haven’t read this one yet... Well, what are you waiting for? Come and join me in my nail-biting, anxious waiting! I know you’ll enjoy it. Perhaps not the waiting, but definitely the reading.