Review: Legacies of Talimura: War of the Witch, by Angel Haze 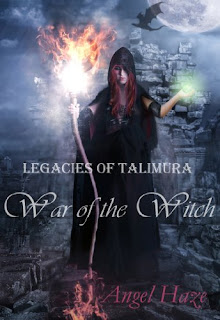 “Debonair, a witch from the Unspoken Lands, has meddled in the forbidden practice of magic and created an army of nightmarish proportions. When sixteen-year-old Astanyx and his two best friends return from a hunting trip to find their small town of Polca reduced to smoke and ash, they find themselves thrust into a battle for which they haven't been trained.
With the help of his comrades, including an esteemed warrior, one of the last great wizards and a princess they've sworn to protect, Astanyx must fight to unite the kingdoms of the humans, dwarves and elves. He must ask forbidden questions that no one wants to answer, questions about Talimura's dark history. As Debonair's brutal warriors lay siege to the kingdoms, Astanyx is driven to pursue a fateful quest for a blade powerful enough to defeat the malevolent witch before she destroys the three kingdoms and unleashes an unspeakable ancient evil.” GoodReads’ blurb

I really wanted to like this book. I fell in love with the cover, and the blurb promised a classic for the genre, in that peasant-boy-turns-hero that had so many fans before the shades of grey entered the arena and that I still enjoy from time to time.

I guess it could have been. There was a deer hunter who gets hell bent in stopping the evil forces that threatened to overtake his whole kingdom after his home village his destroyed. Then, there’s the princess, who is rebellious and loves playing with swords and doesn’t mind hanging out with a deer hunter. And there’s the evil witch who tries to bring darkness over the world with her army of brutish monsters. None of these aspects is enough to bring down the quality, but still I was unable to enjoy the novel. There were, in my opinion, two issues. Not going into deep detail, I’m just going to illustrate using the first couple of chapters so that the story’s not spoiled for you:

The first issue was related to the main character and his development. At the opening scene, he’s a young man who’s just into his hunting years, and who comes back from an excursion with his friends to find his home village ravaged. His father is alive and entrusts him with the mission of warning the king of the army of monsters who attacked the village, since it’s heading for the capital in a straight line. Astanyx and his friends take off, dutifully, and up to that point all is well. However, upon arrival to the capital, the kids are ushered to a meeting with the king and his advisors. Their information is immediately trusted, which, okay, I can be pushed to believe. But then Astanyx becomes some sort of protegé for the Captain of the guard, trains as a warrior, and performs well enough in his first battle ever, killing a lot of monsters and being unscarred.

And that leads to the second issue: the plot had some parts that almost felt like holes. Because note that the army of monsters was marching in a straight line for the capital, had an advantage over the kids, who also made haste in a straight line, but somehow Astanyx and his friends reached the capital without running once into the creatures. The scouts of the king had sighted the army, but had not been able to determine that they were monsters or that they came from the South, so the information volunteered by the youths is still new and useful. And somehow, there’s still time to evacuate the city and train three deer hunters barely out of their adolescence into soldiers.

How and when did that training happen? Why’s Astanyx trusted by the king? Why does the Captain of the Guard take him under this wing? Where was the army while the kids were making slow way over to the capital? Now, I’m all for heroic licences, but that felt a bit too much.

I’d have been able to recommend this novel then, because there’s lots of action and battles and the promise of an interesting setting, but as it is, I don’t think I can. I judge books based both on quality and technique, and on the level of enjoyment I get out of them, and War of the Witch just couldn’t give what I asked of it. If the issues I’ve mentioned are not important for you, then you’ll surely enjoy it, though.