Review: The Foul Mouth and the Fanged Lady, by Richard Raley 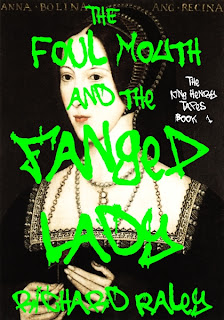 “King Henry Price is fourteen, he loves everything he's not supposed to and hates everything he's supposed to. One day after his usual hour of detention he comes home to find an enigmatic woman named Ceinwyn Dale sitting in his kitchen, telling his parents lies about a special reform school. What she tells King Henry is different, she tells him he’s a mancer, a Geomancer to be exact, that he’s special, one in million maybe. She sure ain’t a fairy giant and King Henry sure as hell ain’t Harry Potter, but why not? Got to be better than the life he’s already got.

King Henry Price is twenty-two, a recent graduate of the Asylum as an Artificer. With the special ability to create lasting items of the Mancy, he’s spurned the Artificer’s Guild and struck out on his own to found an Artificer workshop looking to do things his way. One night, a vampire baroness claiming she’s named Anne Boleyn walks into his shop, telling King Henry he’s going to help her, and she’s not taking 'no' for an answer. King Henry is pretty sure the whole name thing is just a joke, but only pretty sure…" GoodReads’ blurb

I wasn’t sure of this book when I got into it, which only goes to prove how sometimes you just can’t go cover shopping: because, could you please say “LOVE” a little louder?

King Henry Price is the narrator behind this title, putting his life on tape as part of a project for us to listen to. The style is fluid, conversational, and if this were to be turned into an audiobook, it’d feel exactly as if you were listening on to the tapes, on both sets. That’s how good the author has been at capturing King Henry’s voice.

I did say two sets, by the way. There’s one, narrated by King Henry right out of the Institution, the Asylum... the “real”, twisted version of Howarts (I’m getting to that in a moment), where he remembers how it was when he joined in the fun, back when he was 14 and a thug and a delinquent in the making. And then there’s the second set, narrated by an older, responsible King Henry, who even has a daughter and loves her and everything, but who gets into the mind of his twenty-two year old self to tell us why he’s so damn famous. Or infamous. Both sets are mixed, in that we read about Asylum entry and then into meeting Anne B., and then back into classes and then forward into... I realize this might sound confusing, but here’s the thing: it works. It’s seamless and it’s perfect, the way we go from kind angry with the world to adult to youth who starts to stand on his own, and then little by little we bridge the gap until we’re left with nothing but King Henry Price.

Good news? There’s still a lot of bridging to do, from the end of his first infamous venture to the moment where he has a girl of his own and a semblance of respectability. And I can’t wait to read how that goes!

Now, I mentioned Howarts. No, really, it’s an easy analogy but you’d better get it out of your head. Boarding school for people with special talents, and there the similarities end. Because that’s where the magic, or rather, the Mancy system takes on a most original turn. Nothing is easy, flashy things costs too much energy, and first of all: you’ve to recharge, so you’re a one trick kind of deal. King Henry will explain this much, much better, but I loved the complex system devised in this book, with all the schools and levels and specialties.

Similarities also end, by the way, because King Henry is nothing like Harry Potter (though he mentions the lightning bolt boy a time or two). The book’s titled “Foul mouth” for a reason, I warn you. King Henry is crass, abrasive, too full of attitude, like a pot of shimmering anger about to go off and send everyone half a mile around straight to hell... But he matures, and while he still loves the f-bomb, he learns to care. And he’s got brains. Both book smart and street savvy, he can handle the Mancy like no one... except perhaps Miss Dale, his protector and role model, with whom a rather tender relationship blooms in spite of everything. I liked Miss Dale, she was airy and sharp and detached, but in the end she was all she needed to be to reach King Henry. That’s saying something!

I even loved Annie B., and now, that’s a relationship funny to explore: she and King Henry, all the time mistrusting and threatening and hitting each other (please, note how I didn’t write hitting on each other) but coming through in the end. Understanding, I think.

The plotline itself might seem simple, in a way that you’re not taken in long detours that have you looking at the wrong developments, but in the straight to the point, keep the tension up kind of way. And since the characters and the world aren’t simple at all, I’m grateful. Besides, let’s not forget that this is Henry – sorry, King Henry – recording his tapes: he’d not dilly-dally. He’d go straight to the action, cut to the chase. He’ talk just as this book is written.

I received this book for review back in the first of September (no comments about the length of my TBR queue, please) and it’s true that there were some typos sprinkled here and there. They were typos in the real sense, no grammar mistakes, except that one “you’re” that should have been a “your”, and except in that one instance, they didn’t really bother me – I didn’t stop reading to note them, didn’t have to re-read anything, hardly realized they were there. They might or might not have been edited since I got my copy, but even if they’re still there, this story is just too damn good to pass.

So, my verdict: Recommended read? Hell, yeah! 5 stars book all the way!