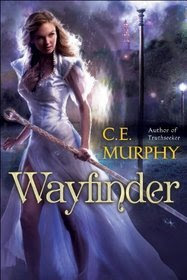 Lara Jansen is a truthseeker, gifted—or cursed—with the magical ability to tell honesty from lies. Once she was a tailor in Boston, but now she has crossed from Earth to the Barrow-lands, a Faerie world embroiled in a bloody civil war between Seelie and Unseelie. Armed with an enchanted and malevolent staff which seeks to bend her to its dark will, and thrust into a deadly realm where it’s hard to distinguish friend from foe, Lara is sure of one thing: her love for Dafydd ap Caerwyn, the Faerie prince who sought her help in solving a royal murder and dousing the flames of war before they consumed the Barrow-lands.

But now Dafydd is missing, perhaps dead, and the Barrow-lands are closer than ever to a final conflagration. Lara has no other choice: she must harness the potent but perilous magic of the staff and her own truthseeking talents, blazing a path to a long-forgotten truth—a truth with the power to save the Barrow-lands or destroy them.” GoodReads’ blurb

I didn’t know Wayfinder was the second volume in a duology until I got it. At first, I thought I’d buy Truthseeker, the first part, and then follow up with my reading. Then I made the mistake of opening the first pages of Wayfinder... where a detailed summary of events so far is supplied.

Without this backstory, you’ll likely be lost. This is one of those cases where you can’t just “hop in” at any given point. That said, though, the matter-of-fact statements, talking about the wonderful and the impossible in such a direct way, had two adverse effects: one, it got the idea of reading Truthseeker out of my head, because I already knew it from top to bottom. Two, it gave me a feeling of characters progressing too fast, becoming heroes with little reasoning behind the changes, and pulling off too many great deeds in too short a time. So, I went into Wayfinder feeling quite sceptical.

And then Wayfinder took my scepticism and twisted it right away into pure wonder and delight. How good does a book need to be to manage that?

The Truthseeing concept behind the whole story, where truth and reality make up a symphony and lies and deception stand out as discordant choirs, capture my attention from moment one. Then, Lara learned to better control her power, little by little, and even though she was a mortal in the world of timeless fairies, she could stand on her own two feet by the end. Her evolution was huge, but it was also gradual and justified. While I think the other characters don’t change quite so much, we do get to know them better and so villains turn into heroes through our perception alone.

It was very well done, but I think the way the author handled the storyline itself was even better. At first, I thought we’d be facing a Quest Book as Lara tries to find and rescue Daffyd. Then I thought we’d have a full-on battle book, when they both reunited and it became obvious that conflict loomed in the air. Then I was thrown completely off track – off the correct world, even! By this point, you’d think I’d have learned not to guess with Wayfinder, but I tried yet again and placed a bet on a Good Guys Save the Day kind of adventure, with some redemption thrown in. And that’s where I found the mystery that needed solving, with all the pieces falling into alarming places, and the unexpected justice being served in the end.

Few books manage to surprise me quite this much, and few books manage to keep me happy through that many changes. Wayfinder did. It hooked me and pulled me along for the ride, gave me the unexpected and made me smack my head when I realized, in retrospect, how much sense it made. So, my verdict? Go and get yourself a copy of Wayfinder. Even better, get Truthseeker and Wayfinder both.

Why, I’m considering going back for volume one, just because the characters and style were such a delight!