Review: A Prayer for Dead Kings, by Scott Fitzgerald Gray 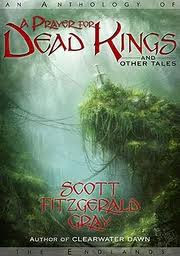 “When he finally seized the sword, Morghan felt the power again, spiking in a sensation like the emptiness of unspoken words. A bloodless rage twisted through him just as the voice had twisted through him before, and in that instant, in a heartbeat, in the rawness of memory where it clawed at him from the dark dreams that the day tried to push away, he knew that anything was possible.

Too many things still to be done.

So many debts to repay.

• In a lost tomb, a warrior haunted by the deaths of those who once followed him hears an offer of redemption in the voice of an ancient blade…
• A sword of kings lingers in a forgotten forest, where dwells a timeless spirit of the wood — a creature able to sense the apocalyptic future that unfolds if the weapon is ever reclaimed…
• A prince and princess share a bond of blood and a dark secret, both of which threaten to destroy them when their father is killed…
• A warrior living under a monstrous curse has his wish for death transformed by a desperate young girl with blood on her hands…
• A reclusive storyteller finds himself in possession of an enchanted axe that promises he will rule the world — whether he wants to or not…
• The pain of the past haunts a mage sought out by the woman he once loved, who needs his knowledge and power to save the life of the man she loves now…
• A young exile returns home carrying the weight of betrayal and the stolen sword that is the symbol of his people — a blade with which he will destroy the legacy of the father he tried and failed to kill years before…
• A king long thought dead walks his war-torn homeland as a ragged pilgrim, consumed by the sins of his past. But even as he does, the daughter of his greatest knight hunts him, desperate to convince him to take up the crown once more…

The first Endlands anthology from Scott Fitzgerald Gray, "A Prayer for Dead Kings and Other Tales" follows a disparate group of heroes and villains caught up with the dark history — and darker destiny — of nine weapons of ancient magic, lost to time and mind.

In the aftermath of the fall of Empire, magic is the ultimate force for tyranny and freedom in the lands of the Elder Kingdoms. Magic defines the line between right and wrong, life and death that compels countless characters to take up a mantle of heroism they never expected to wear.
However, in the world of the Endlands, even the tales of heroes seldom end as expected…

A Prayer for Dead Kings is complicated to rate and complicated to review, because it contains several stories and each of them is widely different from the rest... Still, I will try.

One thing that all stories shared, to some degree, is the style. I found Fitzgerald Gray’s prose to be quite elaborate, and quite purposefully evocative. I say “purposefully” because at times it was clear that the intention was to evocate the dreamy feeling of a fantastic, long-lost past in the reader, and while it was beautiful it also made some scenes drag a little. Perhaps I’m wrong in saying this, but it’s true that I noticed a heavy depicting of ambiance and lyrical feelings in detriment of action or dialogue. It worked in some stories, it made some stories less hooking – specially in conjunction with the other common trait, which was a slight lack of background.

The Anthology takes place in the Endlands, as the summary says, and that’s one world I’m not familiar with. At this moment, I don’t even know what else has been written in that world, so I approached the book with a fresh mind. It’s clear from the first moment that the Endlands have a rich history, very detailed myths and cultures and races that might or might not be what we expect to find in an epic fantasy novel. Towards the second half, I became tentatively familiar with the peoples, nations, and I also managed to form a somewhat hazy picture of history and conflicts. That means that for the first half, I had a feeling of disentanglement, of knowing that something should make sense while being unable to figure it out... In short: the stories need context to be fully appreciated and enjoyed, and there’s not much in the way of clear context supplied.

I have to admit that I didn’t much enjoy The Wood. That’s the second story, and while I can recognize and admire the courage and talent needed to write a story in a tree’s point of view... it just didn’t exactly work for me. A bit too confusing, too far removed from our own human range of experiences to allow me to sympathize with the tree’s cause and its decision.

The Name of the Night (first) was well written, but again it left me with a bittersweet taste after finishing. I believe it was for the lack of perspective: I didn’t understand why the action happened, why the heroes reacted as they did, who the villains were... Even now, after reading the rest of the book, those aspects are still confusing.

Dark Road (fourth) and Memento (sixth) were just beautiful. They’re the perfect example of lyrical style without it being forced or overdone, without detracting from the story. Granted, if we think on terms of resolution, there might be a few complains (particularly about Memento, because I know there’s a lot of people who will expect a different outcome...) but still.

A Space Between (third) was also highly enjoyable, albeit for entirely different reasons. I loved the daring choice of creating these siblings, their relationship, their twisted ways. I know I was truly relieved at the ending, and even though I’d have liked to understand better their situation, the history behind it, in this instance the lack of knowledge didn’t detract from the story: it only served to leave me wanting more. I’d not mind a continuation of this one!

Stories (fifth) was a blast to read. My favorite by far among the short stories, I actually laughed aloud at the axe’s antics – and by the way, isn’t that neat? Finally a Great Weapon of Doom that isn’t a sword! – and the crazy schemes it tried to concoct. Sometimes, I almost felt the need to give it some chocolate and pat its shoulder. And the end was most satisfying, so... Definitely the best.

However, if we talk about the whole book, the tale I loved best must be the novella, Ghostsong. It is, perhaps, the most classical, and yet I find it also the most absorbing. Perhaps because I have a better chance of grasping the conflict, of taking sides, of understanding the characters... Perhaps it’s just because I liked Raub and Cass, their difficult pasts and their desperation. Whatever the reason, Ghostsong alone is enough to make this book so worth it for me.

A Prayer for Dead Kings is the short novel lending its name to the whole collection, and I have to admit that it was a most original concept. Particularly style-wise: it’s written entirely in present form. That means that even actions that happened in the past, or are happening, are written in present. Example: “The warrior’s cloak is steel-grey once, but the stain of too many leagues darkens it to mottled dun and black”. It’s also sprinkled through with a lot of flashbacks – also presents in some of the other short stories, but perhaps the length of the work itself makes them more apparent here. All in all, while well-written and interesting, I found I had to wade a bit too much to reach the story itself.

So, now you see my quandary. Some parts are straight four stars, some other parts are three stars, and I can’t do  halves. In the end, I gave it a three, but keeping in mind my own standards for rating:

It means that the book is good and recommended to people who like the genre, in this case, epic fantasy.

If you’re not into it, it might not be the best first book to get your first taste. Then again, who knows for sure?