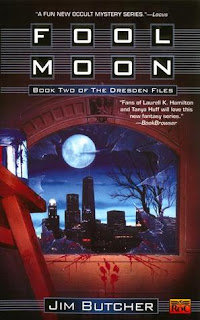 “Business has been slow. Okay, business has been dead. And not even of the undead variety. You would think Chicago would have a little more action for the only professional wizard in the phone book. But lately, Harry Dresden hasn't been able to dredge up any kind of work—magical or mundane.
But just when it looks like he can't afford his next meal, a murder comes along that requires his particular brand of supernatural expertise.
A brutally mutilated corpse. Strange-looking paw prints. A full moon. Take three guesses—and the first two don't count...” GoodReads’ blurb

Most everybody knows about the Dresden Files, and I boarded this train a little late, since I’m only now reading – well, listening – to the series, but still I’d like to share my thoughts, however briefly.

Fool’s Moon is the second volume in the series, and how I loved it!

It’s more than just my admiration for James Marsters narration of the books, or the way I keep finding Dresden’s head an interesting place to be. It’s more than the non-stop action, more than well thought out mysteries and interesting character relationships, even though all of those are reasons on their own.

Nope. What I loved about Fool Moon was the originality. We can safely assume we’re going to be talking werewolves from the blurb, right? Yes, okay, we’re right. Except that Jim Butcher takes it one step further:

Werewolves... of what kind?

Yes, in Fool Moon we find out that Dresden Files lore has room for several kinds of werevolves, from natural to ambitious to plain demonic... and Harry needs to hurry figuring out which one he’s facing if he wants to make it.

I thought he wouldn’t. As it seems to be his tendency, he makes it by the skin of his teeth, reaching success while fumbling in the dark, with a dose of both luck and desperation to take him there... The fact that this time we had to add the police department to the list of “things to work against” instead of “helpful items” just made it all better.

What happens with the cops, you ask? Well, it ties in with the character relationship. I love Murph, I really, really do. I think she’d be perfect for Harry, too. And I think she’s right to get pissed when Harry fails to supply all the information he holds, as he did in book one. So, the book starts with them in a tense mood... and it only gets worse from there. I wanted to smack them at some point, to get them both over their own problems!

But up until the very last minute, you won’t be able to tell if they’ve made amends or are still at odds. I mean it. There’s a scene, at the end, that completely caught me by surprise. As always, not saying anything more because I don’t want to spoil it. You’ll have to find out. Seriously: go, sign up for Audible or something, and get yourself an audio copy of Fool Moon.

If audio’s not your thing, then okay, go and get the normal book. But read it. You’ll enjoy the original take on Urban Fantasy, on Magic, on magician’s politics, on mystery novels...