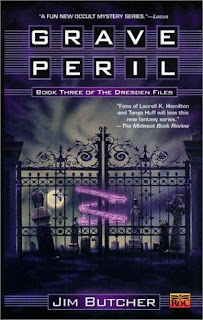 “Harry Dresden's faced some pretty terrifying foes during his career. Giant scorpions. Oversexed vampires. Psychotic werewolves. It comes with the territory when you're the only professional wizard in the Chicago area phone book.
But in all Harry's years of supernatural sleuthing, he's never faced anything like this: the spirit world's gone postal. All over Chicago, ghosts are causing trouble--and not just of the door-slamming, boo-shouting variety. These ghosts are tormented, violent, and deadly. Someone--or something--is stirring them up to wreak unearthly havoc. But why? And why do so many of the victims have ties to Harry? If Harry doesn't figure it out soon, he could wind up a ghost himself . . .” GoodReads’ blurb

At the beginning of the audiobook, there was an author’s comment saying that many people felt that the Dresden Files series really took off with this volume. I kind of hope that it didn’t, because I didn’t like Grave Peril as much as the previous two instalments.

That’s not to say that it wasn’t en enjoyable read. Harry Dresden is very much his usual self, facing against odds stacked too high against him, pulling it off by crazy last-stands, trying to do the right thing and getting zapped in the process. In that aspect, Grave Peril was very much like the previous books, and in that aspect I was hooked to the read, cheering and wowing and wooing in all the right places.

The things that bothered me, if bother is even the right verb, concern the supporting cast. For one, Harry’s relationship with our journalist friend becomes much more stable. Okay, even if that’s not the girl I’d have chosen for me. Then, Murphy is nearly wiped out of the book, and while she has a decent excuse to be unavailable, I’d have liked to see her around, as before. And finally, we have Michael. Who’s Michael, you say?

Harry grows a sidekick, someone who knows him has worked with him in the past, and has just recently been part of a huge operative along with him, and we were none the wiser. The operative, which is the root for the whole conflict in the book, happens behind the scenes and we are left to deal with the fallout. It’s not that it grated me to the point of insanity, but I’d have preferred to get to know the villain who seeks revenge, so that I could at least know why he did it. I’d have preferred Harry to keep his usual cop team, and, if a new good, kind-of-supernatural helper was so important, I’d have liked to get to know him a little beforehand.

Also, while this is something that happens in previous books as well, there was one thing that began to bother me while listening to Grave Peril: all the secondary cast is female, incredibly – supernaturally – hot, and most of it neglects the use of a bra. I understand Harry needs his eye candy, but hey, so do I! Couldn’t we have some mixed villains? Some standard female characters, even, if males were out of the question.

So, all in all, I found Grave Peril to be entertaining but slightly weaker than its predecessors. Not weak enough to recommend avoiding it, but I do hope that the next books will go back to the previous line. I think you should start reading Storm Front and Fool Moon, and then give Grave Peril a shot if you loved them, as I did.