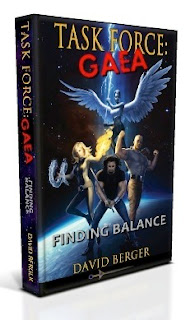 “Dan, Aleta, Brandon, and Sarah -- four reluctant modern day heroes gifted by ancient civilizations born of the gods -- bound by prophecy, have to choose whether or not to save their world when it could mean they never existed. They must master their new powers while battling incomprehensible forces from the Underworld and repairing the Sacred Scales, destroyed long ago.

With the equilibrium between Order and Chaos unhinged, and the Olympian gods struggling to exist, these four must join with the United Nations to protect an endangered world, becoming the only group who can fight against the metaphysical threats to the Earth, forging Task Force: Gaea.

I’m pretty sure that you know, by this point, all about my healthy obsession with myth and folklore. Because of that,I was quite stoked about reading Task Force Gaea... and it was good. But.


I found one issue that could be potentially major for readers. The book has several parts, but it’s most distinctly divided in two halves. And the first one is a narration of events by Apollo, with a small contribution when the point of view changes to his son in one chapter. When I say “narration”, I mean just that. Apollo is telling the events to someone else, with no dialogue and very little action.

This first part is, I understand, important to understand the worldbuilding—which I didn’t really understand until we moved on to the second half, but was based on events from the first. Still, I believe that the amount of detail was not necessary. The key stuff could have been covered somehow without going over 150 pages of just one character talking. It dragged, and the fact that we are encountering original Greek names quite often didn’t help to make the reading any easier.

Still, the concept was interesting and once the second part picked up, I was able to enjoy the story. The characters were diverse and compelling, not just your usual kick-but heroes, and the consequences towards the end were original and well-thought out.

Perhaps it’s just that it was slightly difficult to push through to that second half... it might also be that, back when I studied the classics, I did it in Spanish to on top of the style, vaguely reminiscent of said classics, and the huge amount of myth and names, I had to constantly think about who was who. However, I think you’ll be more likely to enjoy Task Force Gaea if you’re very familiar with Greek culture, myth and literature, and if you have plenty of time. And if you don’t mind the slow parts.