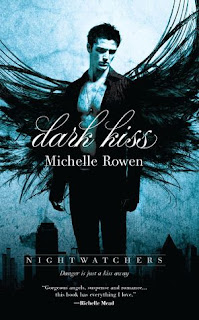 “I don't do dangerous.  Smart, über-careful, ordinary Samantha-that's me. But I just couldn't pass up a surprise kiss from my number-one unattainable crush. A kiss that did something to me...something strange. Now I feel hungry all the time, but not for food. It's like part of me is missing-and I don't know if I can get it back. Then there's Bishop. At first I thought he was just a street kid, but the secrets he's keeping are as intense as his unearthly blue eyes. If he's what I think he is, he may be the only one who can help me. But something terrifying is closing in, and the one chance Bishop and I have to stop it means losing everything I ever wanted and embracing the darkness inside me.... NIGHTWATCHERS When angels and demons must work together, something beyond evil is rising...” GoodReads’ blurb

I might or might not have been on a reading block. The truth remains that it had been a long, long while since I had devoured a book as fast I did Dark Kiss.

Picturing the gorgeous kid on the cover as Bishop helped, but there was more to it, I promise.

Back in the day, I’d say I was very wary of angel stories. I thought, and still do, that they are one of the most difficult paranormal creatures to write right. Then I read Matchbox Girls and fell head over heels in love with the sub-genre... Finding jewels like Dark Kiss does wonders to keep me hooked.


The lore behind the plot is quite unique, and I for one loved that part. I can’t go into much detail, but it’s about Heaven and Hell co-existing (a little like two mega-corporations would co-exist... not happily, but necessarily) and humans having souls which can go either way.

So what happens when souls start disappearing? When humans can live without them? Are they truly doomed? Or were souls just a commodity to begin with?

Those are a few of the questions this novel brings forth. The answers come, slowly, wrapped in lies and half-truths and hard choices about who to trust, but they come and they are satisfying.

The characters are what move the story forward, and I found that I liked them—a lot. Carly and Kraven, the support cast, were both distinctive and while they might conform with some general traits for support cast, they still felt unique and fuelled by their own issues.

Bishop, I fell for him (pun totally intended) when I read the prologue, in his point of view. I honestly would have liked to read more inside that defiant, proud head of his... When we meet him again, he’s changed and the spark that attracted me is partly lost, though later on the story we can see why he’s behaving like that.

Sam had some traits that I really liked: namely, she’s not perfect. She has issues. She likes to do the safe, responsible thing, but sometimes she’s too much of a good person and other times she’s just too real to be able to stick to her own rules. I found that refreshing. How many heroines do you know who are trying to be good in spite of a history of running away and shoplifting? Usually, it’s the bad girl or the good girl with no in-between, but Sam’s more than that.

There seems to be a case of insta-love in Dark Kiss, but in the last leg of the book we’ll learn that it, in fact, wasn’t. That there was a very logical reason for the burning attraction both of them feel. And I have to say, that was neat.

All in all, this was a thoroughly enjoyable book with the right amounts of hotness, love, action, and sheer drama. I could go from not caring about a character to love it and to scream “noooo!” along with Sam. I could guess some twists, but others were pleasantly unexpected.

And I definitely wanted more.

I think you should seriously consider adding Dark Kiss to your TBR pile—and perhaps bumping it slightly toward first position, too. Because, see that awesome cover? The contents are so worth of it.