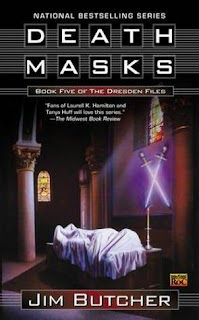 “Harry Dresden, Chicago’s only practicing professional wizard, should be happy that business is pretty good for a change. But now he’s getting more than he bargained for.

A duel with the Red Court of Vampires’ champion, who must kill Harry to end the war between vampires and wizards…

The missing Shroud of Turin…

A handless and headless corpse the Chicago police need identified…

Not to mention the return of Harry’s ex-girlfriend Susan, who’s still struggling with her semivampiric nature. And who seems to have a new man in her life.

Some days, it just doesn’t pay to get out of bed. No matter how much you’re charging” GoodReads’ blurb

And yet another great performance by James Marsters as Harry Dresden!

I really liked this instalment. There was Susan, who I didn’t like. There’s Michael, whose impromptu appearance on book 3 I didn’t like. And I kept falling asleep through some chapters (I think this part is due to my being exhausted because of work, though). And there wasn’t enough Murphy. Sounds like a bad recommendation, right?

Actually, this has to be one of my favorite titles in the series yet.


Harry is just as he was. As an improvement on book 3, this time he’s not moping around, but he still needs to accomplish the impossible and manages to do it by the skin of his teeth.

Susan improved. With capitalized I. She has lost most of that unnerving curiosity that led her to bite more than she could chew and that ridiculous obsession with uncovering the perfect article. Now she’s got more important priorities, like helping people and fighting the good fight... and she can kick ass. So while I still prefer Murphy, Death Masks helped me to like Susan as well.

Michael still isn’t my most beloved guy, but he had some scenes that made me laugh. The same scenes also made me groan in frustration. This time, though, his presence was easy to understand, and we already knew him so it was not sudden character-dump so I’m not complaining about him.

I just got a question for you, if you’ve read the series this far: When did he recover his sword? Because I can’t recall him doing so, and he’s waving it around here. Which is a big no-no, unless I missed some important scene in the previous book.

Now I understand what they meant about the series taking off in book 3, though. One and two were independent stories of Urban Fantasy linked by Harry. Now we’re facing one new challenge each book, and there’s the constant thread of the war between wizards and vampires.

A war that Harry stupidly started in book 3 because Susan was to self-centered to understand that some things were more important than her article, and that she should listen when she’s told she’s in over her head.

Not complaining, though. I still like the action, I still find the new plots original, and I still love Harry’s attitude.

If you’re into the series, read this one. If you haven’t started yet, I’d recommend you to get to it as soon as possible, from what I’ve read so far.