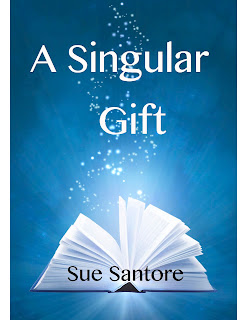 “The title and cover of this book has been changed to better reflect the content. Formerly published as Something Wicked.

Jean Ryan has inherited a singular gift, the gift of magic. She must quickly learn to use her magic gift before the opposing dark magic forces destroy her world. Jean and Wayne, her friend, work together to discover why her gift has attracted the attention of an evil circle of magic users and how to combat them.

As she learns to use her magic, Jean finds revenge bites backwards, friends are not always what they seem, and that magic is not a toy. In the end she has to stand alone against an evil worse than any she has ever imagined.
The book is 56,000 words or about 224 pages in print.

Jean talks about her story:

I never dreamed magic was real until my grandmother gave me the box just before she died.  She told me to use the box carefully and that I was the only one who could use the box and the artifacts until I passed it on to someone else, that it rested on my shoulders now.  But she didn't tell me what "it" was. At first I used the magic as a toy.  I mean, what fourteen-year-old wouldn't?  Doesn't everyone wish she could do magic?  Soon I had to show my two best friends.  Wayne, my oldest best friend, grew up with me.  Karen, my new best friend, only moved to our town last year.

Wayne helped me learn to use my magic, while Karen became obsessed with my box and kept trying to talk me into giving it to her.  Horrible things happened.  People almost died.  Why did so many people want my magic box?  With a sense of urgency hanging over me, I had to learn to use my new powers fast.

Imagine my fear when I read Grandma's journals and found what she expected me to use the magical powers for. How could I possibly do this? How could I not try?” Amazon’s product description

I am not really good figuring out which books are for what age, but first off I’d like to say that this books is more towards children than young adult. It is an entertaining enough read for a twenty-something-up person (or at least, it did not bore me!) but your young nephew, or child, or friendly neighbourhood kid will certainly get more enjoyment out of its pages. Because there is plenty of enjoyment to be had.

One of the best things this book had going was the action. There was something happening constantly, and this is going to sound weird but it was fairly realistic. What I mean is, some novels get young characters into absurd situations but Jean is pretty normal in that she has parents, a family worrying for her, friendship troubles... and she has to learn to deal with her magic without being grounded. This gives us a pretty solid plot that’s easy to get into as we follow her along her maturing trip.

The maturing trip in itself is the other reason I liked a Singular Gift. Jean needs to learn some fairly important stuff if she wants to save her world, and kids reading the book should learn along with her some fairly important stuff of their own that they will need to become good, rounded persons. Some examples that come to mind are the importance of one’s family, of sticking together and trusting each other, or what real friendship is, or how we must not judge people before knowing their real circumstances as sometimes evil is in truth desperation. On the same line, Good and Bad are clearly defined, which should help cement the morality of the reader and make it easy to take sides and sympathize with the right side without getting all sympathetic for the other. And there’s also a neat lesson on responsibility and on the fact that bad actions get bad reactions in an infinite cycle without escape.

That said, there are a couple of issues – that might or might not bother a younger reader, but I believe I should mention them.

One is that Jean seemed to be too slow in a couple of situations. I liked her, and I could relate with her worries and her struggles, and I think I recall how young people hold onto the ideal of their best-friend-forever, so I understand why it took so long for her to accept that Karen might not be all she seemed to be. She forgave and did it fast: okay, that sets a good example so I get it. But at the very, very end... the final showdown... the fact that she does not realize that there might be something odd with the dog was a bit too much. It bothered me doubly because this thickness of skull was not needed to add tension to the scene, which was plenty tense to begin with, and I think it somewhat spoiled a very good, powerful and moving ending.

The same happened with a few editing issues I found through the book. Not many, I recall three moments of “Uh?”, but they were all easy to fix, and I felt they lowered the quality of an otherwise great book. An early example is the abrupt introduction of Jean’s friends by name in the middle of an emotionally charged scene, when her Grandma is dying and she’s getting the box.

If it weren’t for this issues, I’d say this book would be firmly lodged in four-star category because I can see young readers getting gripped by the pace, action, and clever use of magic.

By the way A Singular Gift ends, I’d say that there’re more books coming – or, at least, there should be in order for this ending to make full sense! – so who knows, perhaps this will be the new great magic series! Ms Santore certainly does have the talent to pull it off.