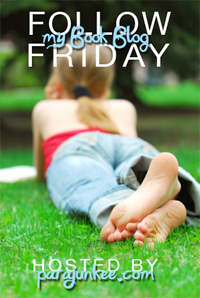 Follow Friday time! Gotta love this weekly random bookish questions. Heck, I'd like them even if they were not bookish! I like to just go on a roll sometimes. But, if the topic weren't books, I probably would be unable to answer half the time so.... Anyway! This week the question is.....

Q. It's that pesky magic book fairy again! She has another wish: What imaginary book world would you like to make a reality?

My first choice would be Iron Fey and the Nevernever, because I'm enamoured of those books and, while the place is crawling with nasties and before you realize it you might be tricked into bargaining your soul away, it still has the kind of quality of a powerful dream: everything is magical and possible.

Then, I think I would really like to be in Harry Potter. This is probably the worst chiché ever, I know, but there's something strangely appealing about living in the dank basement of a castle and getting anything you want with the flicker of a wooden stick. Because, of course, I'd be Slytherin!

I know that if I want castles, I should be rooting for some good old medieval fantasy, but my survival abilities are just not up to par in a sword-waving environment.

Not that I'd expect to survive much longer in the other worlds, but...

Email ThisBlogThis!Share to TwitterShare to FacebookShare to Pinterest
Etiquetas: events and memes