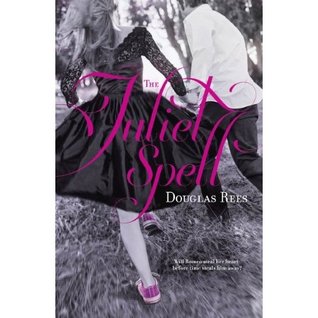 At least, I wanted to be.

So I did something stupid to make it happen.

I wanted the role of Juliet more than anything. I studied hard. I gave a great reading for it—even with Bobby checking me out the whole time. I deserved the part.

I didn’t get it. So I decided to level the playing field, though I actually might have leveled the whole play. You see, since there aren’t any Success in Getting to Be Juliet in Your High School Play spells, I thought I’d cast the next best—a Fame spell. Good idea, right?

Good thing he’s sweet and enthusiastic about helping me with the play...and—ahem—maybe a little bit hot. But he’s from the past. Way past. Cars amaze him—cars! And cell phones? Ugh.

Still, there’s something about him that’s making my eyes go star-crossed....

Will Romeo steal her heart before time steals him away?” GoodReads’ blurb

This book and I were, from the very first moment, a match made in heaven. I fell in love with the cover and the blurb when I saw it, and I only grew to like it better as I devoured the pages.

Devoured is an appropriate verb, too: I might have gone through The Juliet Spell in two days, no longer. It was one of those books that make other things, like socializing or sleeping, sound meaningless.

Before I go on to explain why I enjoyed it so much, let me tell you two secrets about myself: on the one hand, I’m a Shakespeare girl. On the other, I’m a freak of research and adequate behaviour, meaning I expect characters to talk and react as they would in their intended environment. That said, I guess you can already tell which one was the strong suit of The Juliet Spell, right?

Yes. I thought pulling someone out of the sixteenth century and into today was not going to work. The sheer amount of things such a person would have to face, both technologically, religiously and sociologically was daunting. And yet... Edmund works.

He is suitably upset and scared. His morals are suitably out-of-date. His speech pattern is deliciously close to Shakespeare’s plays! Of course, he had to learn things, and to do it fairly quickly, or we’d not have an interesting book, but the progression is there – its speed even explained for the benefit of readers like me! But don’t get me wrong: Edmund’s not out of touch with reality. We can relate to him, understand him – after all, he’s still a man!

Besides, he was very well off-set against the female lead, Miranda. She’s likeable and easy to empathize with, in that she’s a young girl who’s not perfect and wants the role of Juliet very, very badly. She does not swoon when Edmund appears: more like, she panics in a most natural reaction and then she treats him as a friend and responsibility... until the love bug bites her in the behind, completely by surprise (for her, not for us... the realization thing was amusing, I must say).

The cast if completed by Bobby, who was to be the original Romeo, is a bit of a jock type and didn’t get too much of a strong reaction out of me; by Drew, his best mate, who’s incredibly smart and who I definitely don’t like; and Mirandas’ Mom, a down-to-earth former actress who balanced the friendship act with the parent act in a way that almost made me jealous.

And then, there were the cameos: Shakespeare himself, who happens to have an attitude and a huge ego. Doctor Dee, a prominent scientific-slash-paranormal guy, quite famous back in the days of good old Elizabeth. And a lot of small roles, people whose name we would not bother to remember in any other book but who are all significant and quirky and unique in their own ways. I had to take my hat off to that: the research and the original, well-developed characters, even though they might have just a couple of lines in the whole book.

The plot itself, I’ll admit, is not terribly surprising and there are things we can guess at from the beginning – but there were also huge twists, and I know I could not see the last one coming at all. And believe it or not... that is my grip with the book.

Miranda and Edmund are Romeo and Juliet, and even though everyone wants to cancel the show they still pull it off, like the old times, and people is amazed at a kind of acting they’d never seen before, and the actors themselves are just soaring over their characters...

And if you want to know what surprises this one has in store, what happens afterward and in between, I sugges you buy The Juliet Spell. Gripping, compelling, unforgettable, just like Shakespeare’s play. I know for a fact that when you’re so invested, so moved by a book that you can’t stop rambling about the ending for hours after you’ve turned the last page... well, then that book’s a keeper.

Just... don’t forget we’re talking Romeo and Juliet here, uh? Because, funny as it is, I did.