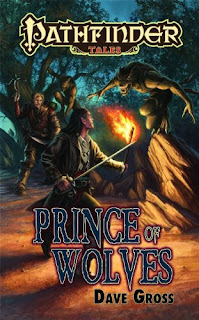 “For elven Pathfinder Varian Jeggare and his devil-blooded assistant Radovan, things are rarely as they seem. Yet not even the notorious crime-solving duo is prepared for what they find when a search for a missing Pathfinder takes them into the mist-shrouded mountains of gothic Ustalav. Beset on all sides by noble intrigue, mysterious locals, and the deadly creatures of the night, Varian and Radovan must use both sword and spell to track the strange rumors to their source and uncover a secret of unimaginable proportions. But it'll take more than merely solving the mystery to finish this job, for a shadowy figure has taken note of the pair's investigations, and is set on making sure neither man gets out of Ustalav alive...
From fan-favorite author Dave Gross comes a new fantastical mystery set in the award-winning world of the Pathfinder Roleplaying Game.” GoodReads blurb

This novel pertains to the sub-genre of role-playing based books, just as Forgotten Realms or Dragonlance, and I will admit that I hold a soft spot for them in my heart: for long years, I thought they were the only kind of fantasy and I still enjoy them. Now, with this small disclaimer about personal preferences out of the way...

What a surprise Prince of Wolves was! The plot presents a “quest” for the characters to solve, true, but that’s about it – Mr Gross has woven an incredibly original tale.


The first thing that drew my attention was the fact that it was written in first person. Not only in first person, but in journal form, as if addressing the reader. That shocked me and certainly intrigued me enough to keep turning the pages, until I reached chapter two and... Lo and behold, it still was in first person... but as told by another character!

This switching dynamic keeps up throughout the book and allows us to understand the characters in a level all other shared-world fantasy would not reach. It maintains the mystery, because we never see what the “bad guys” are doing: we can just read about the repercussions of their actions and the conjectures of the two main characters. And it adds a healthy dose of humor as well, because Count Jeggare and Radovan couldn’t be more different if they tried – and this is portrayed at all times in the different “voice” they speak with. Even if you got confused about the chapter’s order, you’d still recognize who’s talking in just a few words.

The characters alone make Prince of Wolves worth reading, indeed.

But, of course, there’s more: the plot was original and compelling in several ways: one, though there’s good guys and bad guys, the novel is not a fight of light versus darkness. It’s about a quest for knowledge, for the truth of the past, and the dangers lurking along the way. The difference may seem subtle, but trust me when  say that, when reading, it glares out at you. And it’s good.
The other best point about the plot, that I’ve already hinted at, is the fact that I could not foretell who the villains were, what would happen next, or how the book might end. I didn’t just turn pages to see action and adventure (which yes, were present and which yes, pulled me in and made me turn pages) but also to see what was coming. What the truth was. How it’d be solved. What part everyone played in the story.

Without spoiling it for you, let me say that David Gross sure managed to surprise me along every turn of the way.

I’d also like to make a brief comment about background, because I enjoyed it more than I dared to expect. While still reminiscent of a role-playing game (yes, I am a gamer, what gave me away?), it was much more... subdued. Mages and clerics are there, but it feels like finding your average resurrecting fellow or lightning-flinging old man is not half as easy as it seems to be in some other settings. Elves and orcs are there, but the world is not so cosmopolite that you’d think to find three of each into any given tavern. Demons are there, as are wraiths and liches and gods: part of the lore, the legends and the fear. Real, but whispered. I found it a perfect balance, and it’s one of the reasons I’m recommending this book even if high heroic fantasy is not usually your cup of tea.

The only weak point I might complain about is the beginning, because I was confused: the prologue is a third person point of view scene you’ll get to read about later into the book, and... let’s just say, it looks grim for the involved character. So, later, when I read about him as if nothing had happened, I got a bit lost. Then I thought he was going to die afterwards and tried very hard not to like him. And then... Well, I was wrong and you’ll have to read Prince of Wolves out figure out just why.

All in all, I’d recommend this read to anyone who enjoys adventure, fantasy, and even fantasy-tinged mystery. Just, don’t let Varian Jeggare and his talk about nobles spook you on the first chapter, and I can guarantee you’ll be loving him for all the next 270 pages.