This is probably the best news I've had in a while! The amazing Jenn, from Frequent Reader, Infrequent Blogger, has tagged me for this set of blogging awards. I must say they look great and make me smile like an idiot! Here they are: 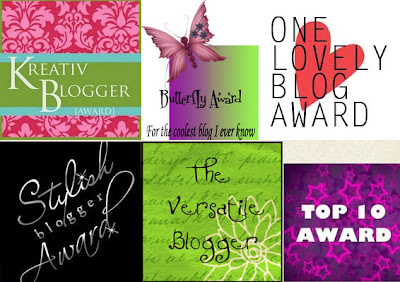 Sweet, no? They come with a few rules, too - hopefully, enjoyable for all of us!
1. Tag the person who nominated you (Jenn, as I said first thing...)
2. Give 7 facts about yourself and answer the Favorites Questions
3. Pass these awards to 15 Bloggers. (Let's pretend I misread this for some plausible reason and pass the awards to 5 Bloggers, ok?)
4. Notify the bloggers of their awards (No obligation to accept the awards, but I think they are cool.)

1. I am a Professional Procrastinator. Really. I can't focus on doing any one thing and I never seem to put a dent on my To Do list. The good news is, from time to time I need to procrastinate from my procrastination. The end result of this curious fact is what I like to call my "job": I'm a translator, reader, reviewer, writer... and amazingly enough, I even get paid!

2. I'm a disorganized person, but it has to be my brand of disorganization. I can leave stuff around, push back doing things... as long as it's on my terms. I actually have a habit of planning for my "chaotic days" (that is to say, I plan for them but if I showed my plans to anybody else, they'd just go, "uh? What's this all about?") and if something prevents me to follow my own schedule, I get pretty upset.

3. I love cats, and I love to sleep - just like them, anytime and anywhere! I need a lot of sleeping hours to perform half-way decently the next morning. I blame my teenage years - I went through High School with three hours a day, and now I have to catch up.

4. I hate spiders. They are the one thing I can't reasonably put up with. I mean, I dislike clowns (I find them sad and kind of pathetic at best and sinister at worst) but I can behave around a clown if I have to. However, if I see a 1/4" spider, I'll scream myself hoarse and run for the hills. After carefully counting the legs of the spider, of course - I'd hate to run off because of an ant's mistaken identity case!

5. I love languages. My mother tongue is Spanish, and I speak English, French, Italian and Japanese. For now. When speaking in English (which I assume is the one most interesting here) I have a very thick accent - not Spanish accent, but some kind of unclassifiable brogue (or so I've been told fairly often). Instead of trying to improve my Oxford pronunciation, I actually treasure my own way of speaking - it makes me a unique me, even if it means the rest of the world will have a hard time understanding the first five minutes of any conversation with me - later, they just get the knack of my pronunciation and everything's cool.

6. As if I didn't have enough time-wasting activities in my belt, I've recently picked up an electric guitar. Since I was a kid, I was told in my school's music lessons that I was deaf tone and a disaster and I always believed the teacher. Still, I like music - am listening to music nearly 24/7. So when my favorite band came to a show in my country, I was there and had a chance to shake the guitarist's hand - more like hold it like an idiot for more than 30 seconds while he smiled at me, but anyway. Afterwards, I decided that I could play as well. Not quite so goo, but enough not to mangle his songs. And thus I got myself an electric guitar, who I call "The lil' Princess", and started to practice. I don't sound so hot yet, but I keep on playing. Why is this story important at all? Why, because that's, in rough drawing, my attitude towards life. No matter what, you have to try. If you try hard enough, you'll eventually get there - perhaps not perfect, but who can tell if you don't try at all?

7. I'm actually quite shy. Go figure, who would have thought it? The truth is, I'm confortable with small groups of people and I have never managed to be the first to start a conversation, even if afterwards I keep it going.

2. Name your favorite song.
1812 Overture, by Tchaikovski. I'll also list Lost in Blue by Nightmare and Reminiscence by Versailles, two of the many songs which made me develop healthy obsessions (and something a bit more modern, too...)

3. Name your favorite dessert.
Cinnamon Roll. Can't get enough. Ever.

Unexpected changes on plans. Lies.
5. When you are upset you...
Retreat to a place where I can be alone and listen to music until I calm down again.
6. Favorite Pet.
Cats. I love cats.
7. Black or White?
Grey, definitely. Though I'd choose Black if I had to, I guess.
8. Biggest Fear?
Spiders.
9. Best Feature?
Shouldn't someone else be answering this one? Er, my imagination, I guess?

11. What is Perfection:
When I don't have to go out of the house all day long, am alone, and have my computer, my books and my guitar available to keep me company.

Email ThisBlogThis!Share to TwitterShare to FacebookShare to Pinterest
Etiquetas: ron stuff and news