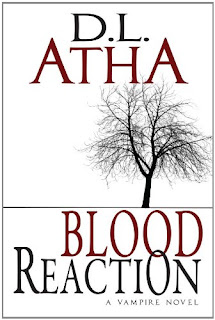 “Annalice, a single mother and physician, is ready to immerse herself in the mundane chores of her farm as a diversion from her hectic professional life. But she becomes the victim of a home invasion, the supernatural kind. Vindictive and cruel, Asa, a century old vampire, takes brutal control of her life and home.

Forcing her to strike a bargain in exchange for her daughter's life, Annalice must not only accept his presence but also bow to his depravity. Facing threats to her only child, she relies on her skills as a physician to unravel the clues to the vampire's existence, attempting to beat him at his own game.

Caught in a race against a genetic timeline, Annalice struggles to survive the Blood Reaction.” (GoodRead’s blurb)

This is one vampire adult novel, and the implication made me, perhaps, a bit wary of the story. Boy, was I wrong!


There is nothing conventional about Blood Reaction and I loved every moment of it. Annalice, our heroine, is far from being incapacitated by the awesome good looks of the vampire Asa. She does not fall hard on her knees – at least, not in love. She might get on her knees for entirely different reasons, but... That’s not the focus of the story.

Actually, their relationship is not the focus of the story. Annalice and her very human will not to die is.

After facing the dread brought on by Asa’s mere existence, after her logic-driven world is pulled to pieces, she brings her wits together and accepts that vampires exist and that she must outwit one of them if she wants to live out the week. They exist, and therefore they are a species: clinging to this knowledge, and to her medical training that says that there is a scientific reason for every feeling and every reaction the vampire provokes in her, she starts to play a deadly game.

I was sympathetic with this character from the very beginning, I understood her reasons and her motivations, and I cheered her on every step of the way. But I loved Asa, the vampire and her nemesis, so much more. He is what he is, a predator whose natural prey are humans. He is coherent, every single moment. We never get a sugared down version of him, we just see the real thing. That is something we don’t get very often, as one or both main characters are sometimes downplayed to fit into a happily-ever-after romance, and it was one of the strongest points of this novel.

Another main point of interest, for me, was the fact that I never knew how it was really going to end. To the very last second, I kept wondering, hoping, and turning page after page trying to find out.

And of course, we must not forget the new feel to vampire-hood that D.L. Atha is bringing to us. For the first time, I think, we don’t go from being human to being vampire: we have a long process that we experience on first person about the change, the steps, the death and the rebirth. I must say it was believable (insofar as we’re talking vampires, of course), original and very interesting for me. I sincerely enjoyed this new take of the old topic.

Reading Blood Reaction I felt there were a number of issues being treated through Annalice’s story. One of them, amusingly enough, was “Mother knows best”. The character’s comments and reflections lead us to believe that she should have listened to her mother’s advice, and that disobedience brought a heap of trouble for her. We also figure out that living alone in the middle of nowhere is not safe for a single mother (not for a single mother, or not for anyone I wonder?) and that the love of said single mother for her daughter will stop at nothing – not death itself. The tone is not such that would turn the story into a lesson for the reader, but I found myself wondering while reading and it certainly felt like a moral. It made for good food for thought, in any case, though I’d not call the novel “educational”, because it’s got some scenes not for the young.

Looking back, I have very few complaints about Blood Reaction. There’s the ending, which I’d have loved if it had gone a different way, yes... but this way I’m left wondering about the “What now?” Did we really see what we think we did? Do we get a happy ending for Annalice? What happens with Michael, the detective? The open finale is perfect for a follow up, and I hope it’ll be forthcoming. I’ll definitely want to check it out.

It’s true that the text itself might need a very slight revision – nothing serious, just a few word repetitions, a clipping sentence or two that could be expressed in a different way. Taking into account how much stock I place on the how it’s written, the fact is that it never made stop reading or loose my focus on the story. This means that they are very small mistakes and that the novel is very much worth a read.

I’d sincerely recommend it, not only to vampire fans but to anyone who would like to branch out into a genre novel, with stress on characterization and constant tensio