Review: Beyond the Shadows, by Brent Weeks 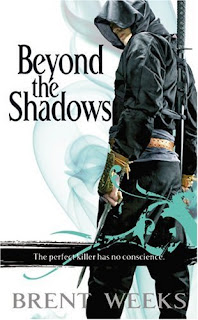 “In this action-packed conclusion to the Night Angel Trilogy, the assassin Kylar Stern faces an assignment that might prove impossible even for his deadly skills—-kill a goddess.” (GoodRead’s blurb)

I’m of two minds about Beyond the Shadows, can’t lie about it.

In a sense, it is the next logical progression after Shadow’s Edge: world shaking, epic, choral. We’ve far moved from the point wherein we just had Kylar and Cenaria. This time around we will follow more characters, we will try to move the storylines to a converging grand finale and will, perhaps, feel that it should not have been like that.


Let me talk about the amazing things first: Logan. Logan has grown so much that we hardly recognize him, and yet every bit is understandable taking into account his experiences. He’s another Good Guy, would be the paladin I guess, except that he’s smart and ruthless in his noblesse oblige. I loved his character, particularly the political bits where we can see how manipulative he is while still being honest and frank at the same time.

Dorian Ursuul, the visionary whose hand has been forced into succeeding his father. Every time he looks into is own future, he slips a little closer to madness and yet he had to look to protect the woman he loved. He was Good, but the line got so blurry as he tried to keep up a Bad charade that by the end the mask nearly becomes the face. This character was very tragic, I found, and was between a rock and a hard place all the time. And yet, he rose to the occasion. He won, in a way and at any moment I could deeply sympathize with him and his plight. To the point that, if I had to choose between Dorian and Logan... I’d be hard pressed.

Lantano Garuwashi, a samurai lord. No, really – that goes to show just how far Brents has expanded his world, I guess. He’s a bit of a Nobunaga, and since I am quite interested in Japanese culture, the clear wink to the samurai era that was Lantano was pleasant.

As you can see, all the best part are character-driven. But don’t fret: when I say best, I mean to say that the parts of the book involving then were the best. Which still means a lot of hard-packed action and adventure, trust me. Now, about the not so great things:

The Chantry part was underplayed. The importance of not having warrior women, the backlash of suddenly creating one such body in their mist, the effect of them joining Logan’s side: taking into account how political Mr Weeks has kept the plot, weaving the action with genuine reason, I think all of this should have been better explained. There are some asseverations about factions and about power that never take us anywhere, too (I’m thinking the Chattel).

So, what did I not like about Beyond the Shadows?

I’m sure you can guess one point.

Yes, the love story. The love triangle, actually. Kylar’s pure love for Elena had no place. Elena’s decision had no basis. And it nearly pissed me off that so much of the ending depended on that relationship and that triangle.

The second point is the ending. Not that I didn’t like how things were by the end, but that I did not like how we got to see them like that. I’m not going to spoil (more), suffice it to say “breezing over” and “deux ex machina”.

Still, although there are questions which have not been answered and bits and pieces that perhaps should not have happened, the good points outweigh the bad ones once more. Beyond the Shadows is a worthy read, even if only because of Logan and Dorian, and I liked the aftertaste it left in my mouth, even when I believe it could have been better.

It could have been better because Brent Weeks seems to be rising, excellent author and he had the ability, yes, but still this whole series is pretty darn good for any fantasy reader worth their salt. I’d recommend it, not just to lovers of the genre but also to occasional foragers and anyone seeking to dip their toes in, as it is.