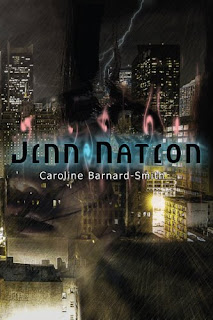 “Once, the vampire Dylan had feared nothing and no one. He'd rampaged throughout the world on a seemingly never ending quest to fill his eternal years with the finest, most outrageous extravagances; with exquisite, soft-limbed young women and copious amounts of rich, vibrating blood. But life, however full of joy, inevitably changes.

Finding himself alone for the first time in his long unlife, Dylan turns to the preternatural race of savage creatures called the jinn - a path that inevitably leads him to Christa, a strangely childlike woman with the power to control minds and read thoughts. Mutually intrigued by each other, they set out on a blood-soaked road trip that crosses the United States and the Atlantic Ocean, finally leading them beyond the world itself to the mysterious fae kingdoms of the Inbetween.“ GoodReads’ blurb

I’m damn close to being the ultimate vampire fan, I think, and I have to admit that the premise for Jinn Nation was fascinating: vampires have been hunted to extinction, a new supernatural race is vying for control, and a couple of unlikely characters seem to be chosen by fate to navigate these difficult times as saviors or betrayers of helpless mankind.

However, there were several things that didn’t work for me, which was a pity because I could tell that the potential for a great story was there. Two issues bothered me in particular: the presentation of the world, and the characters.

For example, suspension of disbelief was difficult when we gloss over Dylan’s backstory in the prologue and learn that the fearsome vampires have been killed while they organized a massive feeding. How can humans just kill them all, to the point of pushing them to extinction, if they were so powerful in the past?

Then, there’s the jinn themselves: a welcome addition, a more than original idea, but by the end of the book I still didn’t know what was their relationship with the moral world: are they lords ruling openly? Do they hide? Are they considered myth, or just unknown? How can they hide their massive killings in any case, or if they don’t, where’s the police?

Much later into the book we face another situation: why can random people recognize Christa as a supernatural savior and give her a name and understand what she’s expected to do even when she ignores it all? The Internet seemed a bit farfetched as an answer, and that’s just the thing: there are too many questions without answers, or without believable answers.

This issue is more prominent during the first part of the book – which is also the slower part. It’s all about travelling, and indulging themselves, and there’s not a clear conflict ahead. While I approve the building of the relationship and of the setting through the character’s actions, I do believe this time it took a little too long to reach the point where the actual plot begins to unfold. From that point on, though, the book’s fast paced and follows a clear direction.

Again there’s a but, though.

The characters are the ones moving the plot forward, and I couldn’t understand their actions at all times. I’m not talking about relating to the egotism, the childishness, the lack of responsibility... I can love characters presenting all those flaws if I’m given a solid reason and solid behaviour. But I can’t believe that Christa is mature enough to be in love with Dylan, or that Dylan has the ability to return her feelings because I’ve not seen them progress that far beyond their initial state. While I do get Dylan’s mercurial mood changes as part of his vampire nature, Christa’s swings and her refusal to accept her role made me want to slap her –hard- and just tell her to grow up.

The supporting cast suffered from the same shortcomings in general lines, though that’s not what grabbed my attention about them. Rather, it was the way they popped up when they were needed to, well, to support the main couple. For example, at one point Dylan discovers he’s not the last vampire by running into an old friend – just in time to force a confrontation with the Jinn, who posed to threat otherwise. Darrel, Christa’s childhood friend, comes in at the perfect juncture to spur jealously in Dylan, when his relationship with Christa’s at its weakest.

Those are the main reasons I can’t recommend this book. It’s original, the level of mature content in both gore and non-graphic sex is a new take on all the sweetness and sparkles, but... I think it falls short of its potential.