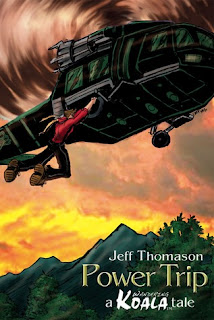 After six months of no luck following college, he finds the perfect job with excellent benefits at The Power Company doing what he graduated in.

But a newly hired manager has a mysterious agenda. Employees disappear with no warning, and René is caught in a massive explosion that leaves the city of 8 million without power during a record-breaking heat wave. Riots rage and fires burn as the city plunges into chaos, and René finds himself framed for sabotage.

Only the intervention of a silent wanderer can save him and the rest of the city from a deadly power trip.” GoodReads’ blurb

*
Straight to the point: I enjoyed this one so much that I could not put it down! It’s an adventure, technically speaking, but there was a wry half-smile in my lips all the time. Mr Thomason did pulp just as Terry Pratchett does fantasy: with a jaded, not-hidden-in-the-least streak of humor and criticism that added layers and layers of enjoyment to the whole experience.


Power trip is a novel well suited for young adults, but I think this time we should move closer to the “adult” part of the spectrum: while the action itself would fit perfectly in a superhero novel, the rest of issues will resonate much better with a 20-year-old... or at least I felt I could relate to René in ways I wouldn’t have at fifteen. Might be because I’’ve been where he is, being taken advantage of as he is, and well, while I’ve not been pointed as the culprit I know I’ve acquired a fairly decent resemblance with a scapegoat at times.

And that is exactly why I’d recommend this book to you in a blink.

René is the new guy, in charge of Public Relations... a career he chose because it was easy. The Company he has –finally- found work at is a monopoly intent on making money without worrying for quality service. Qualified employees are fired (or... yeah, or read and find out) and their tasks fall on unqualified people because hiring someone with the skills would be too expensive. René has lots of free time because come on, who takes public relations with any seriousness? So... he suddenly becomes an engineer!

If you think there’s not enough wry amusement in his adventures at the new job, that’s okay: wait till you have to face the riots. This part was great as well, and touched a touchy (no pun intended) topic about freedom of expression and responsibility and the limits of each... all mixed up with the rather curious reactions of humans in the middle of a crisis!

And there’s more! There’s The Wandering Koala, a mute superhero who operates off a tree and comes in to save the day at the last minute! He offered all the great action you could wish for, and together with his second-man (who I suspect has another book that I need to read) they fight the villains (and show us their agendas... with some food for thought and laughs along for the ride) and toss in some nice comments about the nature of progress.

Or rather, how “villain-like” it can get when some big shots are trying to control the rhythm and direction of progress, not minding the morality of their choices.

It was like a portrayal of reality, of its bad and good aspects, told with enough style not to offend anyone and to make everyone think in between smiles. But it was not a “preaching” novel, because there were engaging characters and an action-filled plot that stood for themselves, beyond whatever criticism you could get out of the reading. A reading that flew by, by the way: it was so well-paced!

If I had to put it in a nutshell, I’d say just two things:

One, Jeff Thomason is like Terry Pratchett, if Pratchett wrote superheroes instead of wizards.

Two, buy this book. You won’t regret it.